Rocket Field came into existence in the late 1950's or early 1960's when a group of local parents started a football program and a basketball program for their young boys. That is how the field became known as "Rocket." Prior to that, the field was part of the old Oconee County High School which only had an organized basketball program for boys and girls, but no baseball or softball. The field at that time was a multi-purpose field. The only baseball played on the field was by teams of adults, quasi semiprofessional teams from Watkinsville, Bishop, Farmington, Whitehall, etc. These teams played games on the high school field usually on Saturday afternoon and with a 25-cent admission charge. In the 1990's, Rocket Field was gifted to the City of Watkinsville by the Oconee County Board of Education when they also deeded the old high school gym (i.e.: the 1902 high school building) and the former vocational building to the Oconee Cultural Arts Foundation.

Rocket Field is located at 34 School Street in downtown Watkinsville GA.  It is a City owned property that is maintained by Oconee Little League.  All restrooms and buildings at this location remain locked due to vandalism and are not intended for public use except during events.

Rocket Field is the site of the annual Oconee County Fall Festival held in October.  It is also used as parking for OCAF (Oconee Cultural Arts Foundation) and the annual Christmas Parade.

At its July 13, 2022 meeting, Watkinsville City Council announced preliminary plans to revitalize Rocket Field in a significant public-private partnership. On August 2 and 9, 2022, the Council held public input meetings to discuss and obtain feedback on the proposed plans. Based on these public comments, the initial plans were revised. The Council approved the final site improvement plan (see plan below) at its October 19, 2022 meeting and entered into a construction lease with Value Added Concepts, LLC to construct the improvements. 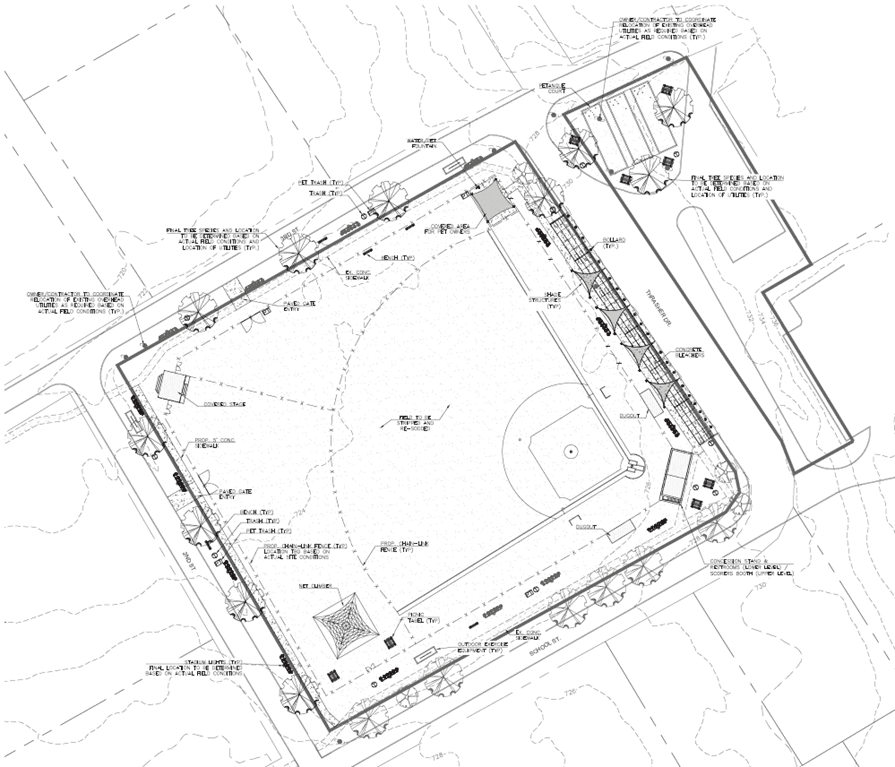 The final plan calls for a refurbished ballfield using artificial turf in the infield and sod for the remaining greenspace, new scorer’s box/concession stand/restroom facilities, built-in bleachers, a dedicated dog park, sidewalk on Second Street, a stage/bandstand, petanque courts, new LED field lighting, scoreboard, and a net climber located in the flexible greenspace.  The field will still be able to accommodate the Fall Festival, and the city will continue to partner with Little League and other area teams to ensure maintenance and shared utilization of the field.

Please note: While the field is under construction, it is closed to the public, and should not be accessed for any purpose without permission from the city.

For more information or if you have any questions, please contact City Manager, Sharyn Dickerson via email at sdickerson@cityofwatkinsville.com or by phone at 706-769-5161.

The below are renderings that show many of the proposed improvements but may include some elements which have been removed or relocated on the site. 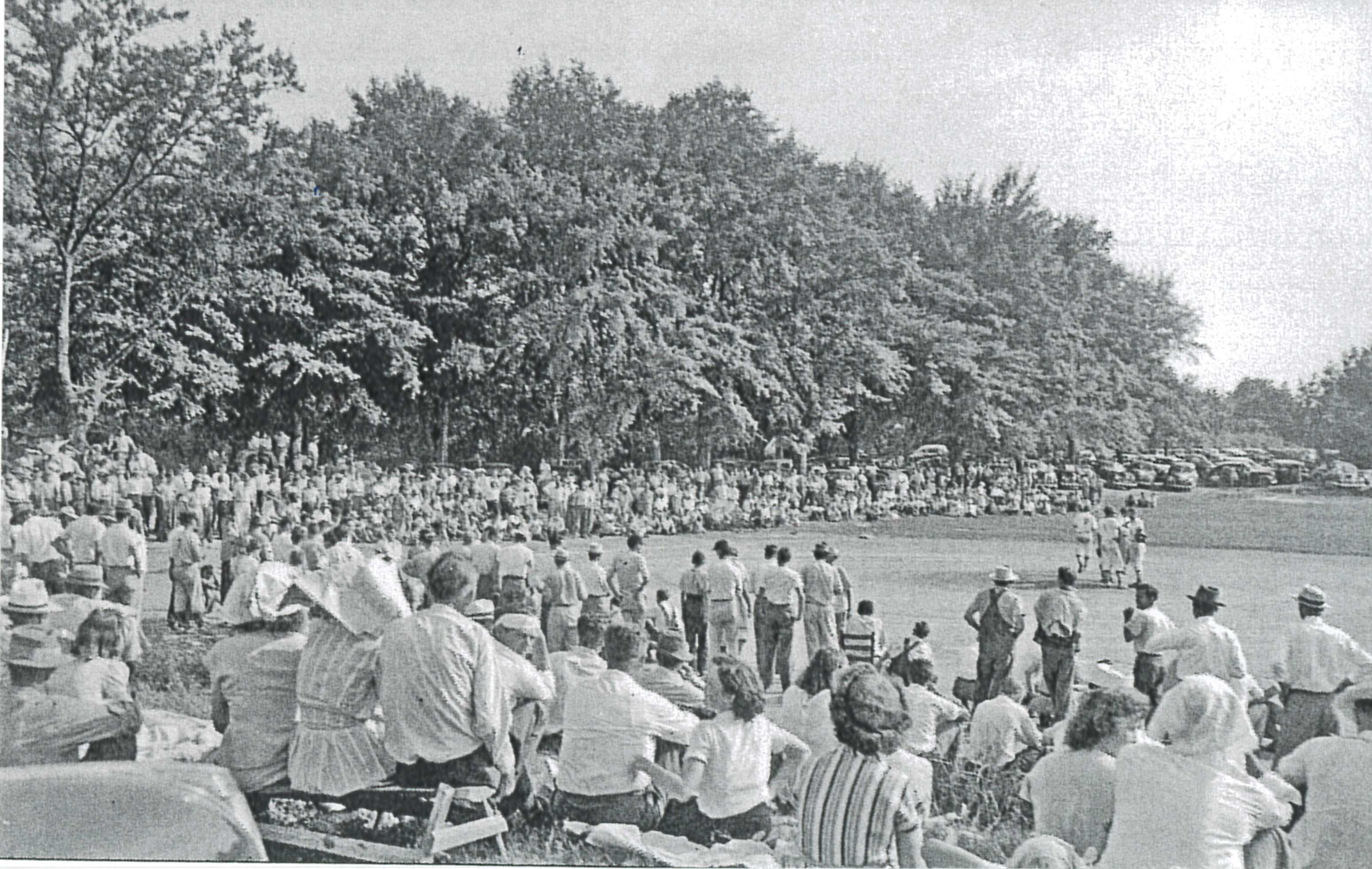 In the intervening 40+ years, the field evolved to serve many community needs. On many spring and summer nights, it still hosts little league ball games. On quieter evenings, local residents and their dogs gather, enjoying the wide open spaces of the field. Many weekends each year, the field serves as overflow parking for shows and events at the Oconee Cultural Arts Festival. And every October, thousands travel from near and far to Watkinsville to buy and sell custom made wares and great food at the Watkinsville Fall Festival, approaching its 50th anniversary.

While Rocket Field has served the city and county well, the sad reality is that this mix of uses has diminished its ability to serve any one of its user groups particularly well. A lack of capital investment due to unclear plans have kept the field in a holding pattern, even as neighbors and visitors clamor over its unfulfilled potential as a ballfield, gathering space, and hub for activities. Its restrooms are aging and nasty, its concession stand hasn’t been used in decades, the lights are dated, drainage is a challenge, and the field has the minimum electric capacity necessary to host the Fall Festival.

In 2022, the city has a unique opportunity to re-imagine Rocket Field.  With a mix of support from city SPLOST funds, a significant private donor and other community organizations, the city has the opportunity to update and upgrade the ballfield to a full size softball and little league field, returning home plate to its historic location in the Southeast corner of the park. This adjustment in the field’s orientation allows new spaces to be captured in the western and northern ends of the park, with removable fencing being installed to create separate, safe spaces for dogs, families, and ballplayers while still allowing open spaces for the fall festival and parking, when necessary.  New lights, electric, drainage and grass will be installed, along with concrete bleachers where the small hill just west of the field sits now, allowing visitors to sit while observing a game. New dugouts will be installed, along with a scorer’s hut, new restrooms, and a modern concession stand. These changes will allow Rocket Field to host small tournaments and games while better serving the youth of our community for practices. A gazebo or shelter of some sort is anticipated at another corner of the field for families or others to use while kids and dogs play, with water stations and -- budget allowing -- some potential other amenities for furry friends and our youngest citizens as well.